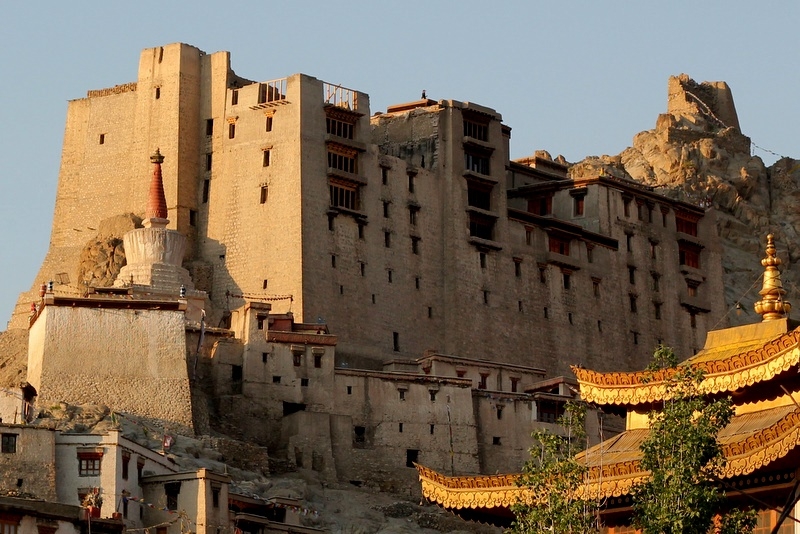 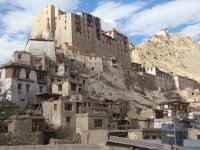 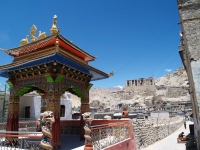 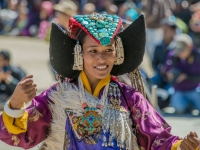 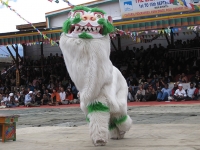 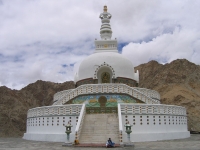 Leh, The Capital of Ladakh Kingdom

Once the capital of the kingdom of Ladakh, now the largest city of the region, Leh is situated high in Himalayan Mountains at an altitude of 3524 meters (11,562 ft). The city’s landscape is dominated by Leh Palace built in grand tradition of the 17th century Tibetan architecture. Modeled on the Dalai Lama’s residence, Potala Palace in Tibet, it served as the residence of the royal family of Ladakh until the invasion of Tibetans and Mongols.  By mid 19th century, the palace got abandoned. Today the royal family resides at the Stock Palace and this massive nine-storey building stands in ruins. Originally the upper floors of the palace had a throne room, a reception hall, the chambers of the royals  and prayer areas, while the lower levels housed animals, wood and food store rooms. The palace is undergoing restoration by the Archaeological Survey of India and it is opened to visitors. There are several exhibitions and the rooftop of the palace offers spectacular views across the Leh city and valley. The entrance to the palace is still guarded by religious structures.

Above the palace is the 16th century Tsemo Fort with a small monastery beneath it, housing an eight meters tall gold faced Maitriya Buddha and two other statues of deities.

The other important landmark of Leh is Shanti Stupa situated at about 5km (3 mi) from the city. A white-domed Stupa was built by the Ladakh and Japanese Buddhists to promote world peace and prosperity. The stupa commemorates 2500 years of Buddhism and was inaugurated by His Holiness The Dalai Lama 14th in 1991.The location of Shanti Stupa is such that it is visible from all over Leh. To reach it one should climb 500 steps which pay off as the hill gives magnificent views of the surrounding landscape especially during sunrises and sunsets.

Leh is an interesting place to shop. In the lanes of the old town one can find exquisite thangkas (rectangular Tibetan paintings on cloth) of Tantric Buddhist deities and ceremonial mandalas. Pashmina wool garments, shawls and handmade woolen items, Bhuddist and Tibetan handicraft items including prayer wheels, Buddhist masks are all popular items. Tibetan and Ladakhi silver jewelry with turquoise, hand woven long-lasting rugs and carpets, woven in wool gathered from Ladakhi goats and dyed with natural dyes, are the things to look for in Leh and Ladakh.

To promote tourism the Jammu and Kashmir Tourism Department organizes several festivals in summer. One of the biggest festivals celebrated with big zeal over the city is the two weeks Ladakh Festival. Organized in September in order to extend the tourist season and promote the rich culture of Ladakh, it attracts crowds of people from all over the region. The processions of ethnic groups in their traditional attire open the festival. Married women wear Perak, made of mainly of turquoise and embellished with other materials such as coral, silver, lapis, pearl, and amber. During the festival the air of the city is filled with clashing cymbals, music of flutes, thudding drums and honking horns. The highlight of the festival and one of the major entertainments is traditional cham dances, performed by monks wearing colorful masks depicting demons and spirits. The festival also involves polo matches and archery competitions held in the backdrop of the majestic palace.

Leh is a city with rich culture. It is dotted with number of stupas, traditional mud-brick houses with flat roofs and ornate wooden frames. Tour agencies offer trekking, climbing and river rafting trips. The streets are filled with pizza restaurants, local cafés and street stalls, selling varied souvenirs for tourists. Leh is a starting point to explore the region, its mountains, valleys, lakes, rivers, Bhuddist culture and its many monasteries spread across Ladakh.