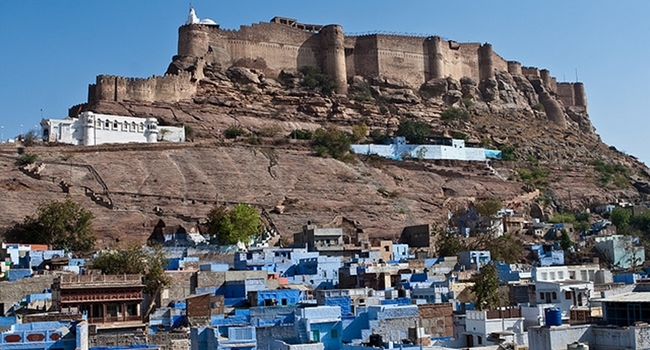 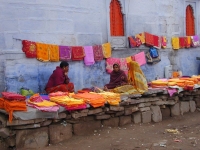 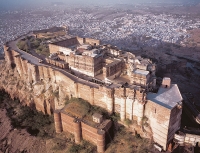 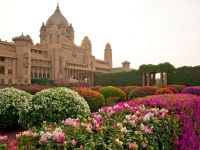 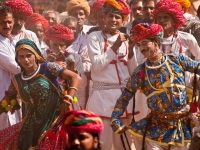 Jodhpur, The Blue City Of Rajasthan

Once you enter the city it feels like the sky felt down on Earth. The entire old town is colored in sky blue or sea blue earning the name to Jodhpur the Blue City. Situated on the edge of the Thar Desert it is the second biggest city of Rajasthan state. Located near the geographic centre of the state, Jodhpur makes it a convenient base for travel in a region. Strategically located midway between the capital Delhi and India’s most industrialized state, Gujarat, during the colonial times, Jodhpur benefited from the trade of copper, opium, silks, sandals, date palms and coffee. Today Jodhpur is a thriving tourist city.

There are different theories why the city was colored in indigo blue. It is commonly believed  that painting houses in various shades of blue had much to do with the prevailing caste system in India. It is thought that Brahmans, the members of the priestly class, colored their houses in different shades of blue to signify their domicile and to set them apart from the rest of the population. During the centuries people of Jodhpur have developed and maintained this tradition.
Another theory explains that termites could be the real reason. During the years termites caused significant structural damage to a large number of the buildings of Jodhpur. Fighting with the insects the dwellers added chemicals, including copper sulphate, to their standard whitewash.

Jodhpur is a famous tourist destination offering myriad places of interest that have significant historical importance. The city is dominated by the 15th century Mehrangarh Fort which is believed to be the largest fort in all Rajasthan. Situated on a steep hill, looking down 125 meters (410 feet) and spreading over 5 kilometres (3 miles) it offers magnificent view on city horizon. The site is included in UNESCO World Heritage list as one of the six Hill Forts of Rajasthan.

Close to the fort complex lies Jaswant Thada, the intricately crafted cenotaph (empty commemorative tomb). It holds the rare portraits of the rulers and Maharajas of Jodhpur and is a peaceful place to relax and enjoy stunning views of the Fort and the city.

The other famous landmark of Jodhpur is Umaid Bhavan Palace. Spreading over an area of one million square feet (9290 square meters) the palace houses a luxury hotel and a museum of more than 300 rooms. The imposing structure and the royal architecture of the building mesmerize the visitors from the far. Built of a special stone called Chittar the palace maintains the temperature at 23 degrees Celsius (73.4 Fahrenheit) all year round.

The Old Town of Jodpur adds charm to the city and it is a perfect place to wonder around. Surrounded by a 10 kilometers (six miles) long wall, with eight entrances it is a good place to inhale the traditional culture of Jodhpur. The labyrinths of alleyways are lined up with tiny shops selling traditional tie and die textiles, embroidered leather shoes, carpets, silver jewellery and antiques. In the centre of the Old City and bustling Sadar Bazaar stands the clock tower which is the Old City's famous landmark.

The beautiful historic buildings and scenic landscapes of the city were featured in some big movies, including The Dark Knight Rises directed by Christopher Nolan and The Fall directed by Tarsem Singh.

The city is also widely famous for its cuisine. A number of Indian delicacies have originated in Jodhpur. To name a few the Makhaniya Lassi (creamy buttermilk drink), Pyaaji Ki Kachori (a pastry stuffed with spicy onion filling), Dal Bati Churma (dal is lentils; bati is baked wheat ball; and churma is powdered sweetened cereal), Lapsi (a special kind of dessert made with cracked wheat, jaggery, coconut and ghee). Mave Ki Kachori (puffed pastry), Besan Ki Chaaki (Rajasthan sweet), Maakhan Vade are some of the most famous sweets of Jodhpur. It is interesting to mention that there is a tradition in Jodhpur first to have sweets and then start other food.

Being a culturally rich region Jodhpur hosts a number of widely known festivals. One of it the Rajasthan International Folk Festival is held in the month of October within the Mehrangarh Fort complex. During this time, the royal city of Jodhpur welcomes more than 250 musicians and performing artists from across India and overseas. The main attraction of this festival is the folk music centred on the romantic lifestyle of Rajasthan's rulers. Jodhpur is also known for the Jodhpur Nagaur Fair, the second biggest fair in India, also popularly called the Cattle Fair of Nagaur. The fair lasts for eight days in the month of January or February. Approximately 70,000 lavishly decorated bullocks, camels and horses are traded every year in this fair. The Jodhpur Nagaur Fair, attracts many visitors from across the country as well as abroad.

The close proximities to the Thar Dessert guarantees Jodhpur sunny weather through all the seasons. Jodhpur is popularly known as the Blue and the Sun City adding India on the map of the world’s blue cities along with Juzcar city in Spain, Chefchaouen city in Morocco, Sidi Bou Said in Tunis and white and blue cities of Greece.