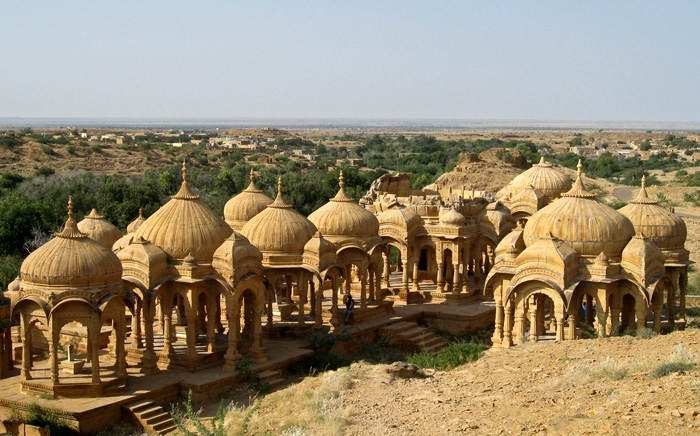 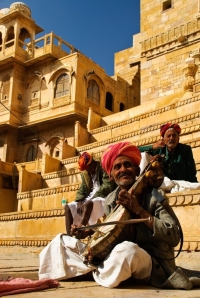 Jaisalmer, The City Of The Thar Desert

In the heart of the Great Indian Desert also known as the Thar Desert lays a small town called Jaisalmer. Built of the yellow sandstone the city turns to a magical honey-gold as the sun sets down. Jaisalmer or the Hill Fort of Jaisal is named after a Rajput king Maharawal Jaisal Singh who founded the city in 1156. The town is dominated by a big sandstone fort Sonar Qila or Golden Fort, known to be the second oldest fort in the state of Rajasthan and one of the few living forts in the world. Almost one quarter of the town's population resides inside the fort. The fort of Jaisalmer is a breathtaking sight rising from the sandy plains. It crowns the 80 meters (263 feet) high Trikuta hill offering spectacular views of the city and the sand dunes. It is believed to be one of the biggest fortifications in the world with 99 bastion, four huge gateways, palaces, Jain temples, bazaars, havelis (private mansions) and residences all carved from the same golden-honey sandstone as the fort, filling up the front with sculptural filigree, screen windows, delicate pavilions and beautiful balconies. The magnificent complex flourished on the east-west caravan route connecting India and Central Asia to the Middle East and North Africa as the city played a major role in trade with Persia, Arabia, Egypt and Africa. Jaisalmer boasts some of the oldest libraries of India which contain rarest of the manuscripts and artefacts of Jain tradition. The Fort of Jaisalmer is included in UNESCO World Heritage list as one of the six Hill Forts of Rajasthan.

Within a walking distance from the fort there is a scenic rainwater Gadisar Lake. Excavated in the 14th century the lake used to be the main water source of Jaisalmer. Today it is a tranquil place surrounded by temples, Holy shrines and chattris (dome-shaped pavilions).

A trip to the Golden City is incomplete without visiting the Sam Sand Dunes and experiencing camel safari. Located 40 kilometres (24 miles) away it offers a unique opportunity to stay at the desert camp, watch the sun melt into the dunes and enjoy the ride on the camel in the Thar Desert.

One of the best times to visit Jaisalmer is during the annual Desert Festival held in the month of January or February (it will be organized from the 1st to the 3rd of February 2015). It is a three days festival displaying the rich cultural heritage of the state of Rajasthan. During this time the music fills the air. From narrow lanes of the fortified town to the sand dunes the vibrating desert drums can be heard for miles around. It is a great opportunity to witness the traditional performing arts like kalbeliya dance of nomadic community which is included in UNESCOs representative list of the Intangible Cultural Heritage of Humanity.

The major attractions of the Desert Festival of Jaisalmer include the turban tying competition and a display of the most glorious moustaches, which not only demonstrate a glorious tradition but also inspire the preservation of the centuries old symbols of honour in Rajasthan. Other events include the camel polo and the camel dance and a best-dressed camel competition. It is a colourful event attracting people from all over India and foreign countries. The 12th century fort provides a fairytale background to this festival filling the air with magic and mystery of the Thar desert.